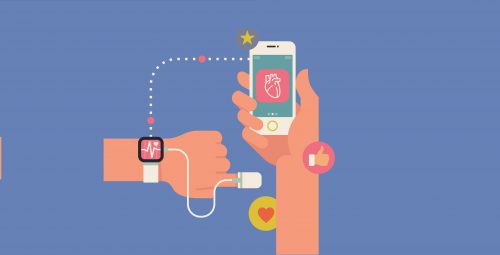 When you hear about digital health, it’s sometimes hard to understand what it is really about. There is, therefore, skepticism about the concrete benefits that digital health can bring to the individual, health professionals, the medical practice, and ultimately, to society. A report recently released by the IQVIA institute for human data science, on the one hand, clearly frames the industry, enabling better understanding of the outlines and features. On the other hand – and above all – it highlights that digital health is really starting to create tangible benefits for patients, and consequently, human health. So, we can talk about the digital health revolution.

The report on The Growing Value of Digital Health

The IQVIA’s report is titled The Growing Value of Digital Health – Evidence and Impact on Human Health and the Healthcare System and is divided into three thematic areas, “innovation”, “evidence” and “adoption”. The document shows that the proliferation of digital health tools, which mainly include health apps and wearable mobile sensors, appears to be very promising in respect to helping improve health nowadays. This is particularly true given that, thanks to an increasing number of studies in this regard, a broader consensus on their effectiveness is developing among the scientific community. And this consensus is the indispensable prerequisite for their use in clinical practice.

What has just been stated is contrary to the trend that emerged from previous studies conducted by the Institute for Healthcare Informatics in 2013 and 2015. The data showed a still scarce and fragmentary use of this type of technology. And the resulting inherent difficulty in assigning a concrete added value. The scenario has now completely changed, and this is highlighted by the fact that these tools are actually starting to be exploited in daily medical practice, bringing tangible and measurable benefits.

What is the digital health revolution?

The term “digital health” is used in the above-mentioned report to designate the use of connected devices. Especially smartphones, tablets, connected biosensors and home virtual assistants. The purpose is to improve people’s health. The main function that makes these devices useful is that they can communicate and exchange information over the internet and send messages. But the objective is also to monitor vital signs and show them in a clear and easily intelligible way.

The following illustration, taken from the report, clarifies what is meant by digital health: 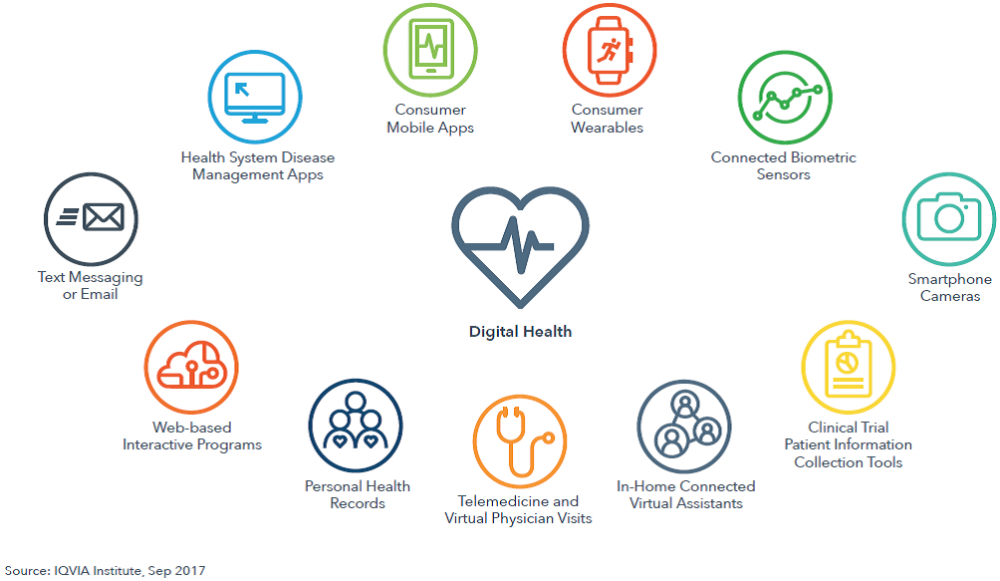 The numbers included in the report are eloquent. They help to understand why digital health is now considered an effective and promising tool. The number of digital health apps has grown dramatically over the last four years. It has gone from about 66,000 in 2013 to more than 318,000 in 2017. Only two years ago, the available apps of this kind were only half the number they are today (about 165,000).

At the same time, the quality of the apps and the number of downloads by users has increased. They are increasingly encouraged to use them by a healthcare professional, if not even by the treating physician. This is because many apps are now specifically targeted to facilitate the management of a particular disease or clinical condition, and not generically to help improve the well-being of the person.

The number of consumer wearable devices (such as smart watches and smart glasses) has greatly increased as well. There are over 340 models of them on the market, and the number is growing steadily. The increased availability and variety of digital health apps has greatly increased the number of dedicated and already published studies, which number well over 570, with the aim of selecting the best applications and demonstrating their effectiveness with solid clinical evidence.

Savings for the health care system

The most significant fact is the possible savings for health care systems. It has been shown that the use of these apps by only 5% of patients would reduce the use of emergency care (diabetes prevention, diabetes, asthma, heart rehabilitation, lung rehabilitation). The US healthcare system could save $7 billion a year. If the hypothesized savings levels for the subgroup indicated were extended to the general population, overall health savings for the US healthcare system would be around $46 billion a year – a figure that is very significant in absolute terms, even though reduced in importance when compared with the enormous US health spending (the highest in the world), which in 2016 was about $3,196,459 million (estimates – source: Oecf.org).

As already seen on other occasions, although digital health can certainly help to prevent and cure diseases more effectively and efficiently, it still has a price in terms of increased circulation of personal and sensitive data that should never be overlooked. First of all, by the legislator, but also by those who offer such tools and services.

It is true that technological jumps are sometimes characterized by minor inconveniences. But it is also true that the consolidation of the use of a new technology, especially in sensitive and intrinsically hazardous areas such as the medical field, is only possible provided that there are adequate rules to contain and reduce the risks associated with such use.

Beyond the privacy aspect, a thorny issue that directly affects the digital health sector is the classification of these tools, beginning with the apps. The line between simple and generically functional wellness apps and diagnostic/therapeutic apps, subject to discipline on medical devices, is still vague, as the rules – despite the efforts of legislators, such as the US with the guidelines on mobile medical applications issued by the FDA, and the EU with Meddev 2.1/6 guidelines and the new Medical Device Regulation (EU) 2017/745 – fail to keep pace with technological progress, which is fast and unstoppable.

Tag: Digital Health, Telemedicine, Healthcare
< Back to blog
Welcome to the Portolano Cavallo Life Sciences blog focusing on legal development and key legal issues affecting the life sciences and healthcare industry.
...
Read more
Our highly-ranked team of professionals will provide news, insights and multidisciplinary commentary on the hottest and most recent regulatory, transactional and contentious aspects of the pharmaceutical, bio-tech, med-tech, food supplement and healthcare world with an eye on its digital transformation and technological developments.