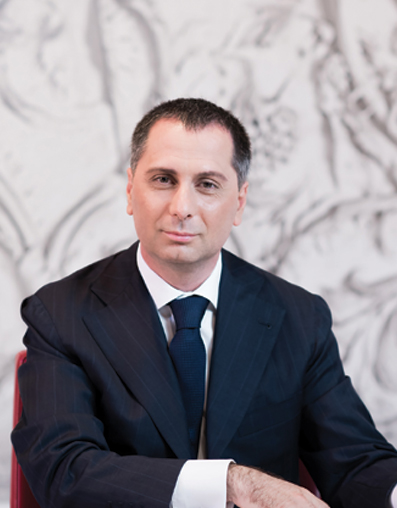 Areas
Industries
Practice area contact for:
Industry contact for:
Apa stands out for his professional preparation, his aptitude for systematic and in-depth study, his independence of judgment."
LEGAL 500 EMEA 2022 - TMT
Ernesto is ranked by The Legal 500 EMEA 2022 in the TMT “Hall of Fame” and by Chambers Europe 2022 in Band 1 (Ernesto was first ranked by Chambers for his media expertise in 2008, at age 30, and has been continuously ranked since).

He is also indicated as a “Notable Practitioner” by IP Stars 2021 (Managing Intellectual Property Survey, Euromoney Legal Media Group), and ranked also by Leaders League and Expert Guides (Legal Media Group). He has been recognized as a Client Choice International Awards 2020 winner in the Media & Entertainment practice area.

Ernesto joined Portolano Cavallo in 2003 and became a partner in 2010. He advises domestic and international clients on regulatory and contractual aspects within the digital, media and telecommunication sector, such as exploitation of digital content, television and audiovisual services, internet, advertising and unfair commercial practices, copyright, ISP liability, electronic communications, etc. Lastly, he has extensive experience on the regulatory aspects of M&A transactions in the Digital, Media & Technology sector, having worked as regulatory counsel on many such deals over the years.

Ernesto is the author of a treatise on advertising, of the entry “Television” for legal encyclopedia “Diritto OnLine” edited by Treccani (the Italian equivalent of the Encyclopædia Britannica), as well as many articles on media and constitutional law on the most prestigious Italian law reviews (Giurisprudenza Costituzionale, Quaderni Costituzionali, Foro Italiano, etc.). With Oreste Pollicino, he edited the first “Codice della comunicazione digitale” (Code of digital communications – Internet, TV, Advertising, Privacy, now in its second edition; Egea, 2015), and authored (in English) “Modeling the liability of internet service providers. Google vs. Vivi down. A constitutional perspective” (Egea, 2013).

He is also the co-author of “La regolamentazione dei contenuti digitali” (The regulation of digital content, Aracne, 1998-2013), a volume celebrating the first fifteen years of the Italian Communications Authority (AGCOM), which includes chapters authored by the incumbent President and all past Presidents of the Authority.

He also co-authored the book “Diritti e libertà in Internet” (Rights and Liberties on the Internet, Mondadori Education, 2017).

He is vice-Editor-in-Chief of MediaLaws – Rivista di diritto dei media.

He is a member of the International Bar Association (IBA), of the think tank ASTRID (Fondazione per l’Analisi, gli Studi e le Ricerche sulla Riforma delle Istituzioni Democratiche) and of I-Com. He is also a correspondent of the European Audiovisual Observatory, Chairman of the VI subcommittee of the Film Classification Commission of the Ministry of Culture and one of the three independent experts of the Government’s Permanent Committee on Copyright.

Ernesto is a member of the Cosenza Bar Association (5370).