A variety of developments have taken place in the Italian legal framework governing the promotion of European works over the last few months. As is well-know, Italy launched an extensive reform of some pieces of legislation that are enshrined to the Legislative Decree no. 177/2005 (also known as the “AVMS Code”) by the so-called “Franceschini Act” (Law no. 220/2016). In order to implement the provisions of the Franceschini Act, the Italian Government issued a series of three legislative decrees, including Legislative Decree no. 204/2017, regulating the promotion of European and Italian works. The three Legislative Decrees were finally approved by the Government on 7 December, and were published in the Official Journal on 28 December, 2017, and entered into force on 12 January, 2018. More recently, further modifications have been introduced by Law Decree no. 59/2019 (the so-called “Culture Decree”, which was later converted into Law no. 81/2019) as a result of the debate between the associations of audio-visual and cinematographic producers, the national broadcasters and the most important on demand media services providers.

Indeed, Legislative Decree no. 204/2017 had provided for a progressive increase in the content and investment quotas that all TV broadcasters are required to apply to European and Italian works. The new provisions have also affected the status of on-demand service providers, even if to a more limited extent.

The new legislation will come into force on 1 January, 2020. Until that date, the quota provisions applied in the first half year of 2019 (i.e., for broadcasters, the programming quota of 50.01% of their transmission time that must be devoted to European works and the investment quota of 10% of their net annual revenues that are to be devoted to independent works, including the 3.2% of the latter quota which is reserved for cinematographic works of Italian original expression) will continue to apply.

The applicable minimum quotas are summarized in the tables below.

Both the Italian Communications Authority and the Ministry of Economic Development, as well as the Ministry of Cultural Heritage and Activities and Tourism, will issue relevant regulations implementing the provisions above. 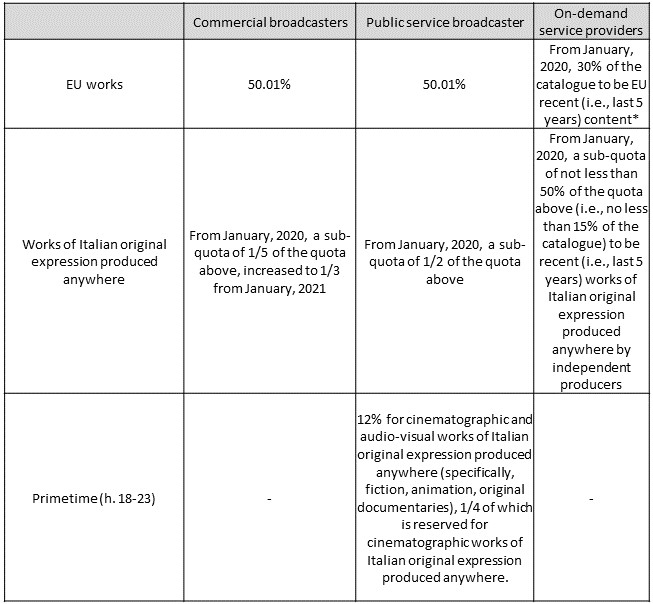 * As for on demand service providers that require the payment of a specific fee in exchange for the delivery of individual programmes, the quota for EU works is calculated on the titles available in the catalogue, and the obligation to reserve a quota for European audio-visual works produced within the last five years shall not apply. 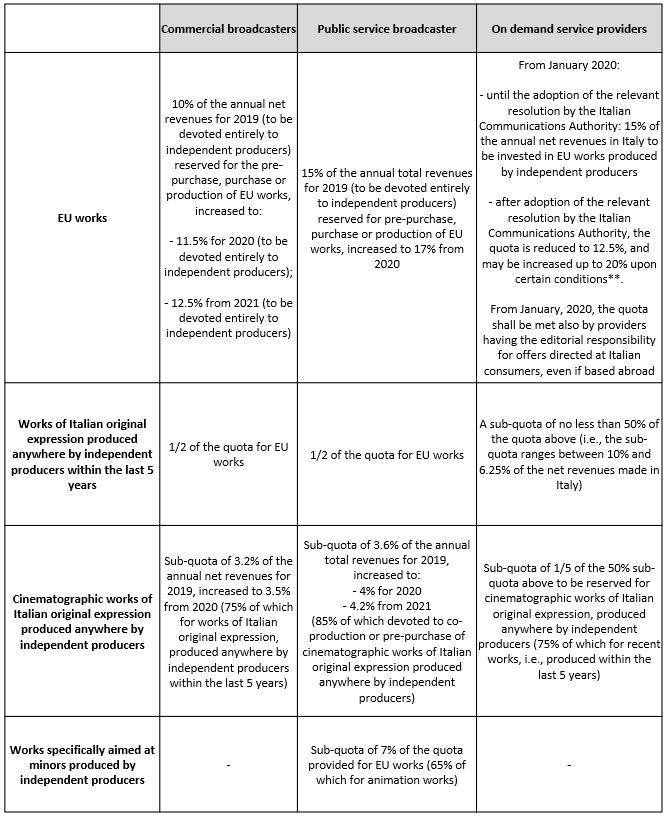 Audio-visual media service providers may apply with the Italian Communications Authority for exemption from the quota obligations reported sub A and B above if:

(i) the thematic character of the programming schedule or of the catalogue does not allow to supply from European independent producers or to purchase, pre-purchase, produce or co-produce European audio-visual works;

(ii) the audio-visual media service provider’s market quota is lower than a specific quota determined by the Authority; or

(iii) the audio-visual media service provider has not achieved profits in each of the last 2 years of operation.

It is up to the Italian Communications Authority to assess compliance with the obligations above on an annual basis, and the relevant modalities have been impacted by the Culture Decree. Effectively 2020, audio-visual media service providers that have not complied with the said obligations may compensate the missing quota and/or sub-quota(s), provided that the latter does not exceed 15% of the share, in the following year, in addition to the quotas and sub-quotas that are due for the same. Likewise, audio-visual media service providers that have exceeded the quotas that are due in a given year are entitled to count the exceeding amount as part of the quotas and/or sub-quotas that are due in the following year.

To these ends, the Italian Communications Authority shall communicate to every audio-visual media service provider whether the quotas have been entirely or partially met or have been exceeded. It is still understood that in a case in which an audio-visual media service provider fails to meet the missing part of the quotas in the following year, or fails to meet the same for an amount exceeding the 15%, the same will be subject to the sanctions provided for by Article 51 of the AVMS Code.

The sanctions for non-compliance range from a minimum of 100,000.00 Euros to a maximum of 5 million Euros, or up to 1% of annual revenues.