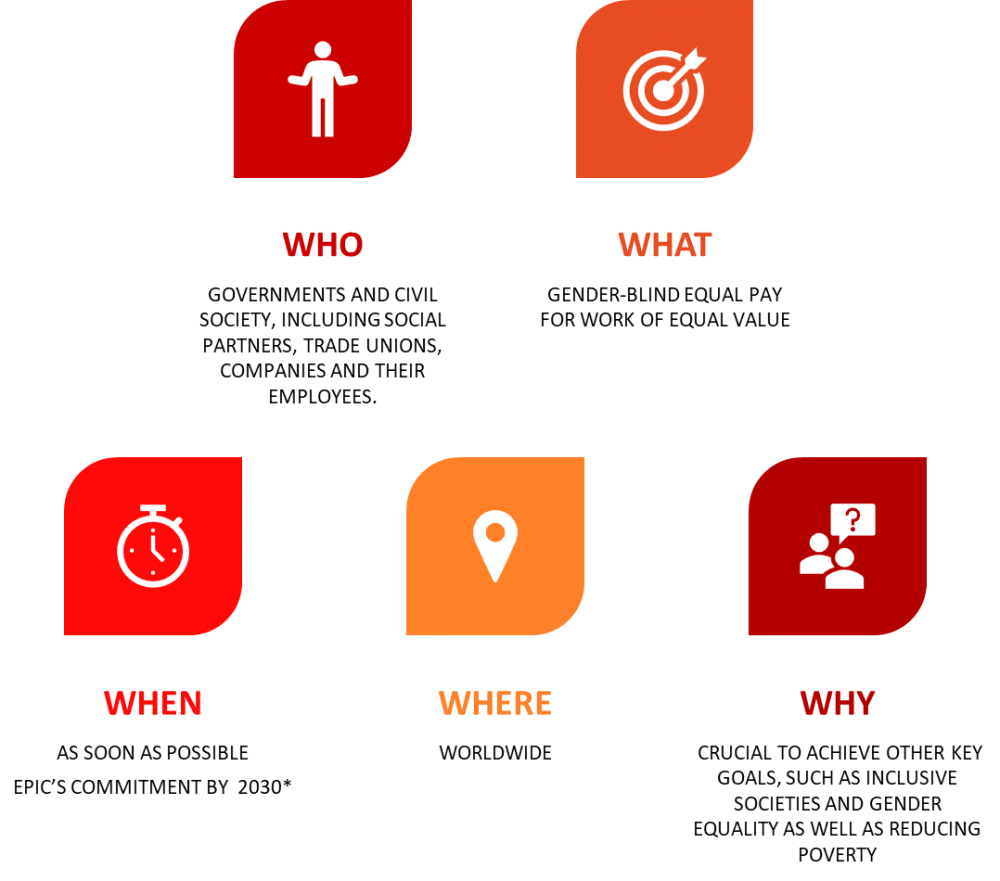 * EPIC stands for Equal Pay International Coalition, led by the ILO, UN Women, and the OECD. The EPIC seeks equal pay for women and men worldwide by 2030.

Closing the gender pay gap is one of the key goals at global, EU and national levels. It can be achieved by providing work-life balance policies, facilitating (re)access to work for women and, not secondarily, the engagement in family roles for men. The policies and any relevant actions can be effective only with the extensive cooperation of a wide range of actors, including employers. However, the limited use of work-life balance arrangements by men can lead to the opposite result by aggravating gender stereotypes and the gender pay gap.

Closing the gender pay gap is one of the key priorities of the European Commission as the way forward to achieve gender equality and, ultimately, of the SDGs of the UN 2030 Agenda.

According to Eurostat – gender pay gap statistics, women’s gross hourly pay is 16% lower than that of men, on average in the EU-28 countries.

However, this data is not able to show a full picture of the income inequalities between genders since its calculation does not take into account some crucial information, such as the monthly average of the number of hours paid and the employment rate of women compared to men.

Consequently, a low gender pay gap is not always clear evidence of a successful gender equality policy. For example, Italy is registering a 6% gender pay gap that is mainly linked to low women’s employment: 60% of Italian women are economically active – employed or unemployed, well below the EU average of 72% (see Tackling the gender pay gap: not without a better work-life balance, EIGE – European Institute for Gender Equality, 2019).

THE REASONS AND SOCIAL IMPLICATIONS

The gender pay gap varies depending on the stage of life and family status, since the burden of family responsibilities may push women to devote less energy to work for caregiving tasks.

It even reached 48% for couples with a child under 7 years with diametrically opposed positions for mothers and fathers: a “motherhood penalty” and a “fatherhood reward” (see Global Wage Report 2018/19: What lies behind gender pay gaps, ILO – International Labour Organization, 2018).

The gender gap is also exacerbated by the cultural (negative) expectations on the employment of women as mothers or potential mothers, resulting in inflexible and not family-friendly work environments.

HOW TO CLOSE THE GENDER GAP: WORK-LIFE BALANCE POLICIES

An emblematic case in the abovementioned EIGE research notes on flexible working arrangements as potentially part of any work-life balance policy, reports that women opt for these to reconcile work and care responsibilities while men use them to work harder and more (see Tackling the gender pay gap: not without a better work-life balance, EIGE – European Institute for Gender Equality, 2019).

Consequently, this aggravates incomes inequalities, also considering that the expectations to be always ready to work and without limitations whatsoever (no matter the caregiving obligations) are one of the biggest obstacles for women in reducing the gender pay gap.

In this respect, the European Union issued Directive (EU) 2019/1158 of June 20, 2019 on work-life balance for parents and carers – the Work-Life Balance Directive, encouraging men to take up family-related leave and flexible working arrangements.

As of today, the EU legislator is also discussing the opportunity to take specific action to tackle the gender pay gap, providing new legislation to replace Directive 2006/54/EC on equal opportunities and equal treatment of men and women in matters of employment and occupation. This initiative would act synergistically with the Work-life Balance Directive, to ensure transparency concerning pay levels, providing personnel rights to information, pay reporting and pay auditing obligations for employers.

Within a broad and systematic policy framework, employers can also play a crucial role, by providing a company regulation on paternity leave and benefits, as well as assistance to access day care services, tailored to parents’ needs.

As stated in the EIGE research notes, the achievement of work-life balance means «not only a greater access of women to paid work but also greater involvement of men in caregiving tasks».

Sharing family responsibilities, by more engagement of men in the relevant caregiving duties, is a necessary step to ensure equal working opportunities among men and women, thus closing the gender pay gap.